As drones are getting more advanced and more expensive, landing pads are becoming more relevant. You’ll need one of the best drone landing pads. On this page, you’ll find some pads worth considering.

In order to prevent any potential damage to your drone during landing, dispose of a landing pad. A lot of people, especially beginners, do not realize the importance of such a tool. Not until they try to land their drone in mud or grass.

The chances that your propellers get caught and damaged without a landing pad here are big. How about trying to land a drone in rocky terrain? Another reason for a landing pad if you want to keep your drone safe and scratch-free.

Every drone pilot, beginner or professional, will soon or later experience a hard landing or lose control during landing. It happens to all of us, and it can potentially cause serious damages to the quadcopter. Especially drones with cameras suffer damages in terms of scratches or broken lenses.

Overall, a Landing Pad for your copter keeps your camera lens clean during take-off and landing. It protects rotors from tall grass and pebble strikes. It also prevents dirt from sucking through motor bearings and causing premature motor failure. And so much more.

With a landing pad for your drone or RC quadcopter, you’ll be free of many issues that could possibly occur without one.

Best Landing Pad for Drones of 2020 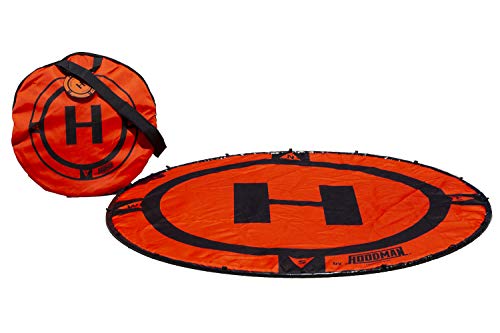 Hoodman surely delivers the best Landing Pads for drones in the market. One advantage that you’ll have with the Hoodman HDLP is that you can get the Landing Pad in different sizes. The most common size is the 5 ft. (150 cm), but they also come in 3 and 8 ft.

The Landing Pad ensures a totally clean take-off and landing. The Pad comes with a carrying bag, and it’s very easy to set it up. The landing gear comes in the color red, and it’s very visible from the air and easy for you to find (camera sight).

It’s easy to fold and place back in the bag too, so don’t worry about those issues. Furthermore, the landing pad is also easy to clean and re-use.

It’s a great Landing Pad for bigger and more professional copters like the DJI drones (Phantom, Inspire, Mavic). It secures the necessary protection for the more advanced quadcopters.

If you’re a heavy user of aerial photographing or a business user of your drone, we’ll recommend you to buy the Hoodman Drone Landing Pad. Clearly, the Hoodman landing pad is one of the most popular choices regarding landing pads for great reasons. 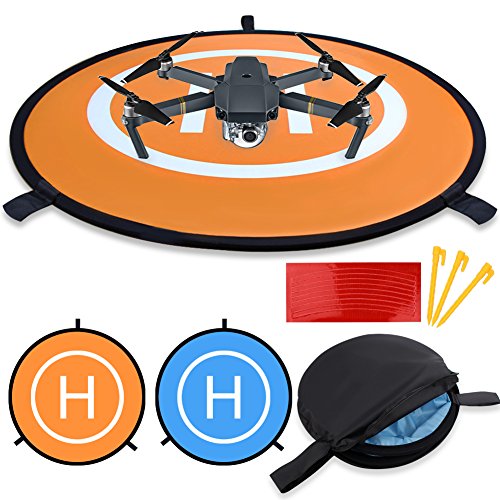 The second best option after Hoodman is probably this Landing Pad. With the high precision printing, sun protection, waterproof and the fact that you can use it on both sides, you don’t get a better option at this type of price.

The KINBON drone landing pad comes with a carrying bag. It doesn’t fly away in the breeze and the visibility from the air is great on either side.

It’s a great pad to use for your professional and bigger drones that need a little more place and protection than smaller quadcopters. 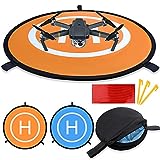 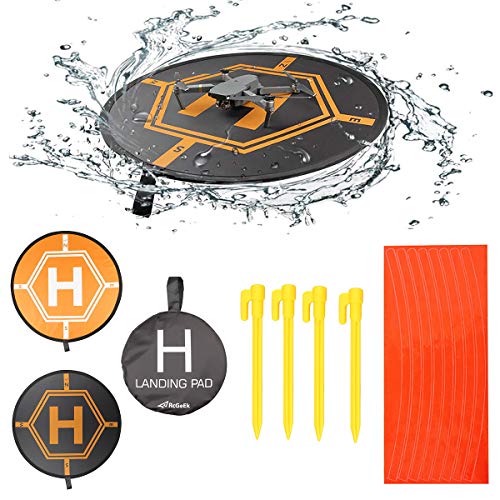 The RCstyle landing pad for drones is made out of waterproof material and adapts to all kinds of bad weather. A carrying bag also follows with the purchase. The vibrant orange color works perfectly, and the size is just enough to allow you to land and take off safely. It is a bit challenging to fold it back up, but you get the hang of it after a while.

We recommend you to purchase this if you’re the owner of a medium to the high-quality drone which you like to protect. 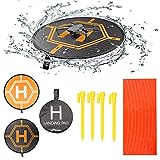 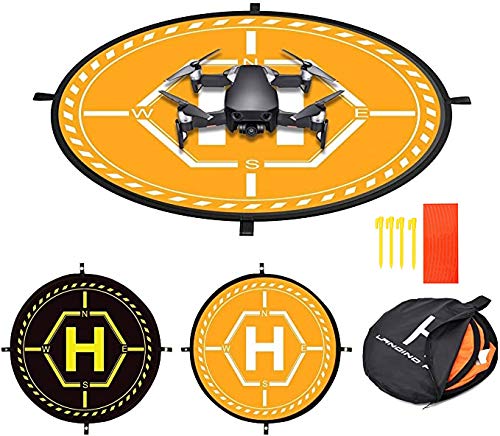 The Fstop Labs drone landing pad is made out of soft eco-friendly rubber and has a waterproof surface. It’s very easy to see from the distance. It has a non-slip bottom surface which means that you can use it everywhere. It’s also easy to fold onto a smaller square and carry it around in your bag.

It is a great Landing Pad to use on bigger quadcopters (DJI Mavic, Phantom, Inspire). For bigger or perhaps more advanced drones, you should look for a bigger and more ‘pro’ Landing Pad (1. Hoodman). 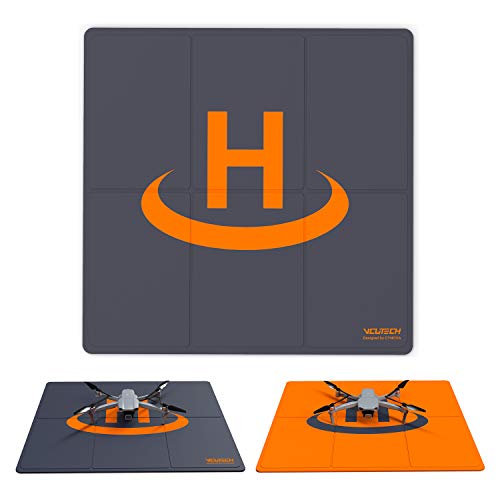 The VCUTECH Drone Landing Pad Pro is made out of 3 mm thick rubber to cushion the landing and of course prevent any damage to the undercarriage of your RC Helicopter, Quadcopter, Octocopter and Hexacopter etc.

It can be used indoors as well as outdoors and although the Pad is considered waterproof, it has limits and shouldn’t be used in bad condition too often.

The helipad is suitable for a ‘average drone’ – which means drones that haven’t been cheap, but hasn’t cost you’re a fortune either. If you are piloting a bigger professional drone and looking for a square formed Helipad, then you should consider the SunfyreTek instead. 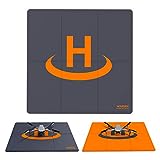 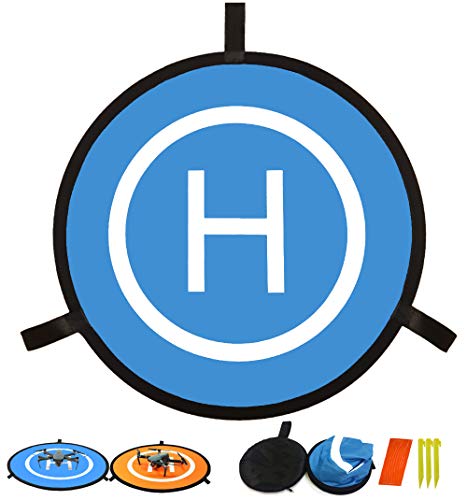 The Yaloon Drone Landing Pad is a medium-sized landing pat that is made of materials with waterproof proprieties, making it a perfect choice for the ones that tend to use the drone in environments affected by water.

The landing pad comes with a carrying bag that makes it easy to carry around. Its reflective strips provide extra visibility making it way easier to notice the landing pad in the dark. Yaloon landing pad has wind-resistant features and it can be fitted with three landing nails for a stable and safe landing.

The high precision double-sided printing process provides high resistance against nature; sun protection, wind protection and water protection for increased durability without any traces of fading away. The landing pad can be used on any kind of terrain (wet grass, sand, rocky terrain, mud and so on). 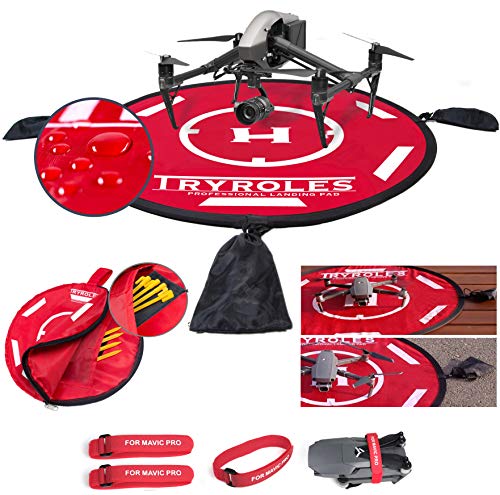 The Tryroles landing pad is a landing pad big enough to fit most of the drones available on the market. It is a perfect choice as it can be fitted in any kind of terrain by either anchoring it in soft terrain using the anchor attachments either by fixing it with weighted bags on har surfaces.

As a double-layered pad made with dirt and water-repellent materials, it is suitable for any kinds of environments as it works the same on dry sand as it works on wet grass and mud.

Moreover, the landing pad is foldable and easy to carry making it a perfect choice for the ones who enjoy adventuring in nature along with their drone. The visibility is highly increased by the possibility to choose between two colors (black and red) as both sides of the landing pad are usable. 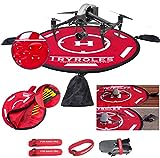 5 Things to Consider Before Buying a Landing Pad

Landin pads come with different functions. The question here is; how do you intend to use it, and what are your demands? Do you want to carry it in your backpack or maybe pockets? Should it be easy to roll out? Easy to pack it up? Should it be very visible, or does it not matter that much?

The design and colors of a potential landing pad probably are more important to some than others. There are many different designs to choose from. You can find square or round-shaped Pads, but what’s most important is the color designs. Lighter and brighter colors are better at spotting from the air.

You want your landing pad to be waterproof, so you can land on a muddy area, wet grass etc. and in different weather conditions.

Landing Pads should provide some form of landing protection to cushion the landing and protect the drone.

Before you are going to invest in a landing pad for your drone, you’ll also have to distinguish between the hobby and pro aspect. There are many professional drone owners who use drones for commercial purposes. These drones are often very expensive.

If you are a professional operator, we’ll strongly recommend you to get a high-quality Landing Pad, which is bigger, thicker and more compact.

Do I need a landing pad for my drone?

You don’t actually need a landing pad for your drone as you can land it wherever you want and can. However, landing pads can prevent your drone from getting damaged by the area you are trying to land it on.

As most of the accidents happen during the landing, a landing pad can provide some extra support that can make the difference between getting the drone damaged and not getting it damaged. Therefore, it is not required to own a landing pad, but it is recommended to have and use one.

Does the material of the landing pad matter?

However, it would be a big plus if the landing pad is waterproof as you will have an extra level of protection and you will be able to land your drone on the pad even on wet grass or any other areas affected by water.

So, as long as the landing pad protects your drone from shock, scratches and dust you should be fine, but it is a wise choice to consider waterproof materials.

Does the color of the landing pad matter?

No, it does not matter that much as long as it is easily visible. As a lot of drones have built-in cameras that are connected to a display (either tablet or phone), the landing pad should have high visibility features in order to facilitate the landing.

For example, it would be quite hard to spot a green landing pad in the grass, therefore you should consider pads with colors that stand out quite easily on the ground (either grass, dirt, bitumen or wherever it is possible to safely place the landing pad).

Most commons colors for landing pads are red, blue, yellow, black and white (most of the times combined).

How big should a landing pad be?

The landing pad should be big enough to fit your drone and to facilitate the landing and taking off process.

However, you should consider your drone’s sizes and find a landing pad that is big enough for your drone but not too big as it can become quite bothersome to carry it around whenever you are flying the drone.

Is a round landing pad better than the square one?

No, both landing pads work the same. However, besides the obvious aesthetic difference, there is another difference quite difficult to notice if you don’t have two landing pads in front of you to compare.

But it is less likely to need that space while landing, therefore the main difference between them is regarding the aesthetics.