If you’re ready to move up from toy drones and beginner drones, then it’s time to acquire a high-quality consumer drone.

Of course, with better quality comes a rise in price so you’ll need to dig a little deeper into your pockets.

You can find some pretty good drones under $500 but even the best drone under 500 won’t be able to match up if you want to get into the best consumer drones on the market.

Although you’ll be required to spend more, you don’t have to go over the top so in this article, we will be taking a look at the best drone under $1000.

The truth is that even though you are spending more, you can end up with a low-quality drone.

For this reason, we have done the research and compiled this list to give you the top drone under 1000 so you get the best bang for your buck.

If you want the best camera drone under $1000, then choose the DJI Air 2S.

However, this is the most expensive drone on this list and it is just under $1000 so keep that in mind if you’re thinking of getting this drone.

After huge success with the  Air 2, DJI introduced the Air 2S.

This model comes with an impressive spec sheet including tons of high-end features and upgrades while being relatively affordable.

The Air 2S can reach speeds up to 42.5 mph in wind-free conditions and has a control range up to an impressive 7.5 miles.

What’s even more impressive is the 31 minutes flight time which is all thanks to the improved battery and redesigned electronic components.

Moving on to the camera, the Air 2S has a 1 inch CMOS sensor and can record 5.4K/30 FPS videos and capture stunning 20 MP photos.

The sensor allows for exceptional dynamic range, exposure sensitivity and can capture up to 12.6 stops in raw.

Moreover, the unit comes with the new MasterShots feature that automatically selects templates to execute a cinematic sequence of shots.

Overall the DJI Air 2S is the best drone for 1000 and a wonderful improvement over the original in every way imaginable. 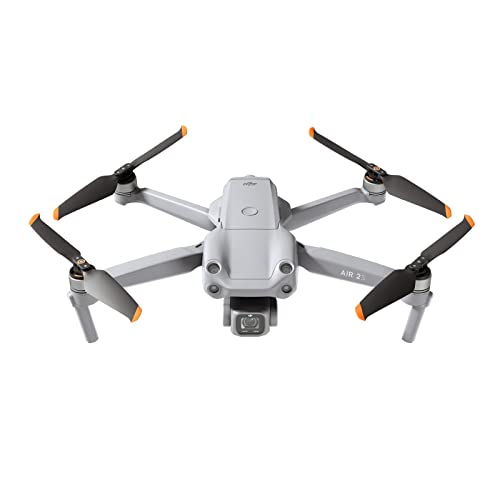 To get the best bang for your buck, choose the DJI Mini 2.

The original Mini played an important role in the consumer hobby drone market and the Mini 2 is just one in the line of the next generation of super-compact camera drones.

This is the best quadcopter under 1000 and perfect for those constantly on the go.

The drone weighs just 8.8 ounces and has some amazing specs considering how small and light the unit is.

Let us first look at the flight time of the unit which is listed at 31 minutes while the control range is said to be all the way out to a whopping 6.2 miles.

It also makes use of a 3-axis stabilized gimbal system that eliminates vibration and ensures that you produce steady high-quality imagery.

The drone provides a live video feed as well with no latency whatsoever and it just may be the best FPV experience you can get from a drone in this price range.

The Mavic Mini 2 also comes with a wide range of top-notch features that takes the entire drone flying experience to another level.

These features include Gesture and Tap-Fly Control, Flight Autonomy, GPS Tracking, Vision-Position-Based-Navigation, Auto-Return among others. 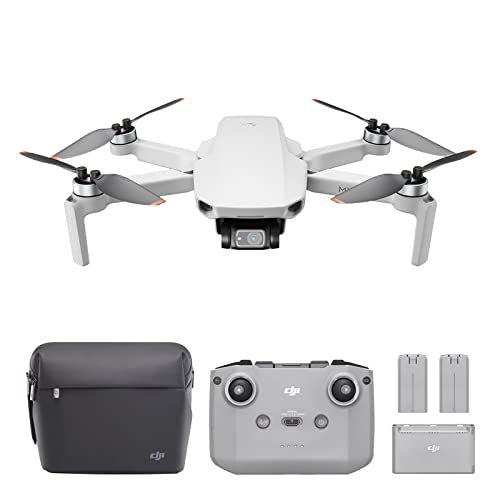 When looking for a non-DJI drone, then the Autel Robotics Evo drone should be your number one pick.

Not only is it a cheaper alternative but it matches up or excels in some ways when compared to a few DJI drones.

This EVO is a worthy contender due to its impressive spec sheet.

At its price point, the EVO offers a flight time of 30 minutes which is just short of the DJI models mentioned in this list.

Another area where this drone matches up with the DJI models is its control range.

This unit has a control range of 4.3 miles which is more than enough for what you will need.

Where the Autel Robotics EVO really stands out is in its camera capabilities.

The unit is capable of capturing buttery smooth 4K/fps videos, thanks to the 3-axis gimbal.

This makes it able to record faster, smoother and cleaner videos than most compact foldable drones on the market.

You can also access Live HD footage whilst flying via the Autel Explorer App.

Even the remote controller of the Autel EVO surpasses those of DJI.

The built-in intuitive 3.3 inch OLED display eliminates the need to use your smartphone as a screen.

The one-touch action buttons on the controller allow you to control the drone easily and can even be flown by a newbie.

As we move away from DJI, there’s a next company that stands out and keeps throwing awesome drones out there.

Parrot has been releasing some powerful drones at affordable prices and drone enthusiasts couldn’t be happier.

The Parrot Anafi is one of the best coming from this company.

The drone comes with a vertically tilting camera that is ideal for low-angle shots.

This is something that is missing from many drones, and Parrot decided to tackle this problem and came up with a solution.

They also added a 3-axis image stabilization system to deliver smooth and crisp images that rival some expensive DJI drones.

The camera is equipped with a wide-angle f/2.4 ASPH lens and digital zoom up to 2.8 times.

Camera features include a burst mode that can capture 10 photos per second, a timer and AI technology assistants to help with and handle professional settings.

The Parrot Anafi has a flight time of 25 minutes and the best thing about the battery is that it can recharge up to 60% faster using the Power Delivery USB Type C charger.

Flight performance is fairly smooth as the integrated Geobarrier technology allows it to detect and avoid obstacles when in flight.

The unit is also loaded with smart functions to return the drone home safely if the battery discharges or if the connection is lost.

The control range is around 2.48 miles which is more than you’ll ever need but it’s there if you need it.

We have yet another drone for Parrot and this one had some awesome features as well.

The Parrot Bebop 2 drone is capable of shooting in full HD and has a control range of up to 1.24 miles.

When combined with the unit’s power pack and  FPV glasses the Parrot Bebop 2 allows you to capture quality aerial shots in full HD.

This all thanks to the fisheye sensor and the stabilization software.

These include Follow-Me, Point Of Interest, Return-To-Home and much more.

As far as the camera goes, the unit is perfect for those who want to capture good quality videos without spending too much.

Like the parrot Anafi, this unit also comes with an adjustable vertical camera for those low-angle shots.

The drone is capable of live video recording with the DVR and in the event of a crash, it allows you to locate your drone faster by rewinding the video.

The unit is equipped with automatic stabilization that comes from a 3-axis digital stabilization system and has a flight time of 25 minutes.

you can either fly it using your smartphone via the app or the dedicated controller.

The Parrot Bebop 2 is capable of detecting wind and other disturbances and compensates for them easily.

Flight performance is exceptional as the drone has excellent stability at high altitudes and against powerful winds.

What to expect from the best drone under $1000 and under

Since you’re going to be spending a decent amount of money, you probably want to know what you can expect from an under $1000 drone.

In the past few years, we’ve seen batteries and drone firmware becoming much more efficient.

This helped to set the stage for cheaper drones being able to have a decent flight time.

You’ll find that some brands will prioritize flight time while others will put more effort into specs and pack their units with advanced features instead.

When choosing your drone, figure out which is more important whether it’s time in the air or the specs.

The control range of a drone is at the top of some people’s list when looking for a drone.

Naturally, everyone wants to fly their drone out to great distances and more so if you’re putting in a good amount of money into it.

Drones in this price range will make you happy as some of these units have impressive control ranges.

This is way more than you’ll ever need but it is great to have, nonetheless.

The long flight range can give you an indication of how well the drone connects, keeps a signal and behaves in flight.

If you are going to be spending this amount of money then you are not wrong in demanding perfect performance.

Fortunately, drones in this category do offer great flight performance thanks to accurate controls.

These units are able to fly in windy conditions and hover steadily without any interference from the pilot.

In our list, you’ll find the top drones with the best performance.

These units perform better in all areas when compared to the others in the same price range.

Again, you’re spending a decent amount of money so you’ll want value for your money.

Drones in the under $1000 category do come with a lot of features so you are not losing out here at all.

As technology advances, manufacturers tend to pack more features into their drones to compete with each other for sales.

These drones will even come with some features that you’d find on the more expensive and over $1000 models.

Some of these features include autonomous flight, Follow-Me, Orbit, Point of Interest. GPS-assisted flight, optical flow sensors and more.

Moreover, these units will most likely come with obstacle avoidance sensors because no one wants to crash a drone under $1000.

As the price goes up, you would expect better camera quality and drones under 1000 have stepped up to the plate.

These drones come equipped with HD and even 4K cameras.

Some of these units may be able to carry action cameras like your GoPro to capture all your high-speed action needs.

However, most drones in this price category onboard cameras will record amazing footage for vlogs, film school projects, semi-professional projects and others.

Can I use drones under $1000 for professional work?

Drones under $1000 can produce semi-professional quality videos and photos.

These units have similar sensors to those on your smartphone.

There’s no debate that the best camera drones cost more than $1000.

However, with a bit of tweaking post-capture, you may be able to end up with professional-quality videos and stills using these under $1000 drones.

However, most countries have flight limits that must be followed.

If you are exempt from these restrictions then the drone’s physical altitude can be limited by two factors.

These include the connectivity range of the remote controller and the capacity of the drone’s propellers.

Are these drones suitable for newbies?

The answer is both yes and no.

These units have the most stable hover and come with many intelligent flight features which makes flying the unit easier.

However, these drones aren’t exactly cheap and one wrong move can cost you quite a few hundred dollars.

This will depend on your needs.

Identify the reason why you need a drone.

In some instances, drones under $1000 and over $1000 will have the same flight capabilities but the expensive drone may be able to handle a heavier payload and a better camera.

So if you are looking to take professional quality images and videos then save up and go for a unit over $1000.

If not and you just want a drone with semi-professional quality footage then your best bet is a drone under $1000.In the end, you want the best drone for the money.