Even since we were kids, we used to play with paper planes.

Kids these days are quite similar to us when we were kids, but the technology these days is incomparable to the technology back then. It is not unexpected for kids to see the drones as one of the best toys they could have.

However, it can be quite challenging to entrust your thousand dollars’ worth drone to a kid that may want to test some acrobatic tricks with it or may test how high it can go. Best way to keep your drone safe and your kid happy is by buying a drone suitable for kids.

The top 5 best drones for kids

One of the best choices among mini drones for kids, ATTOP Drone comes with a couple of features that will make your kid fall in love with this drone.

The drone has a flight time of about 5-6 minutes and it is rechargeable, as well the batteries can be changed as it uses AAA batteries. The drone can be controlled from either a transmitter or a smartphone / tabled.

The built-in G-sensor allows the drone to fly on a path drawn on the screen of the smartphone, therefore it is way easier to be controlled. The drone also presents features such as “one-key take-off and landing” that makes the launch a landing way easier.

The headless mode can be a helpful feature as it eliminates the need for identifying the drone orientation. With the altitude hold feature, the drone is able to stabilize itself and fly at a certain altitude even without any controls. The drone can be folded so storing it won’t be a bother. 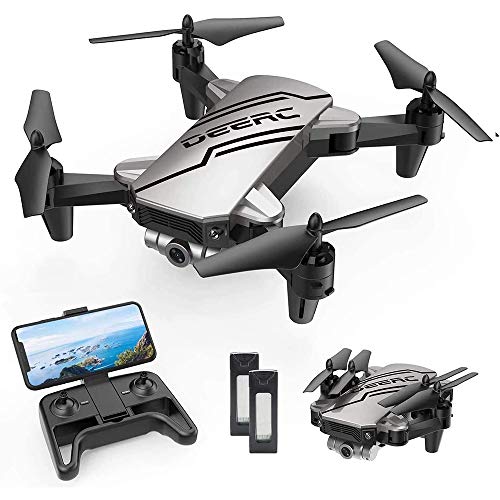 On par with ATTOP Drone, the DEERC D20 successfully proves itself worthy of the second place of this top. D20 Drone has a built-in camera that is able to catch 720P HD photos and videos.

It has two powerful batteries that ensure 10 minutes flight sessions each, therefore you can experience 20 minutes of flight without recharging. The drone has features such as low power alarm and emergency stop that decreases the chances of losing the drone by signalling the lack of energy and safely landing the drone.

The DEERC D20 is able to recognize voice controls, making it easy to be operated without having to use the transmitters controls.

It is also able to recognize gestures that trigger the drone to take a selfie. The drone supports functions such as altitude hold (flying at a certain height without using any controls) and one key take-off and landing. 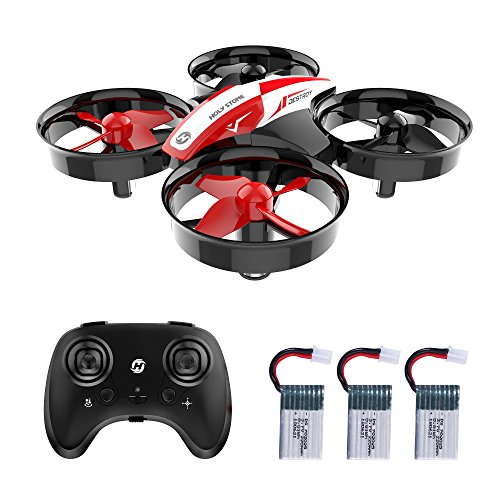 The Holy Stone HS210 is a drone perfect for kids, as well for beginners.

The drone presents a headless mode that facilitates the flying experience as the facing direction does not matter and it becomes way easier to operate it when the drone is far away.

The kids drone comes with three batteries with a lifetime of about 7 minutes each, therefore the total amount of flight time can be prolonged to up to 21 minutes, even more with additional batteries.

As for the battery’s charging time, a full charge can take up to 60 minutes (the charger indicator led will turn green when the battery is fully charged). The size of the HS210 makes it perfect for indoor usage as it measures only 3.15 x 3.15 x 1.18 inches.

The low battery power alarm will reduce the chances of losing it while flying outdoors as when the drone will remain with about 1 minute of flying time, the lights will constantly blink, and the transmitter will start beeping. When the drone will almost run out of energy it will safely land on low electricity mode. 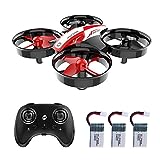 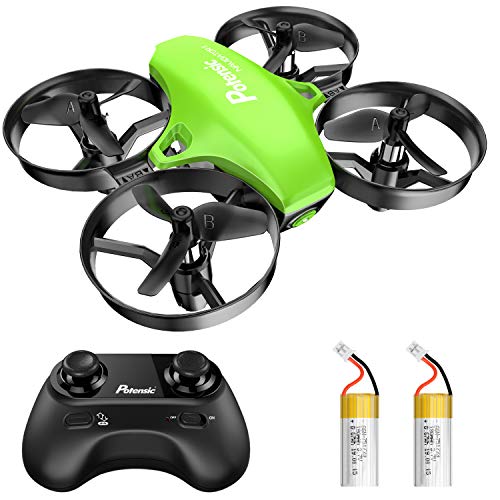 The Potensic A20 has a flight time of 5-6 minutes per battery charge and it comes with two removable batteries.

Also, Potensic A20 Mini Drone has Headless Mode, Altitude Hold feature and One key take-off and landing feature making it perfect for beginners and kids. Also, its size makes it suitable for indoor usage.

The Potensic A20 drone is designed for increased durability as the propellers are protected, making it possible for propellers to survive wall collisions. Due to its compact design, it is easy to store the drone when not in use almost wherever you want as it is only 3.1 x 1.25 x 3.5 inches. 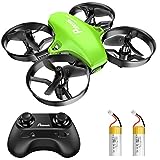 Force 1 Scoot is a drone that is suitable for indoor flights and not for outdoor flights (you can still use this drone outside but it can be quite challenging) as it is not operated by any transmitter and it is controlled solely by hand gestures.

It has a special shell-like design that protects the user hands, the surroundings and the drone itself as well. The Force 1 Scoot has an easy launch feature as you start operating it by simply tossing it into the air and it will start to hover.

A flight session can last for up to 8 minutes and it takes about 30 minutes to get the drone fully charged.

How to choose the perfect drone for kids

When it comes to choosing a drone for a kid, things may get complicated. You have to keep in mind several things that have a direct impact on your kid’s experience when he’s playing with the drone.

Also, the quality of the drone is determined by several factors that will be listed below. If you keep in mind these characteristics when buying a drone for your kid, it is guaranteed that your kid will have a good time while playing.

You can even opt for drones that come with three or more batteries and you can simply change them when the one in use is running out of energy.

Having at least three batteries for a drone can be really helpful, especially if your kid is playing with the drone around the house, as when the first battery runs out of energy he can use the second one to continue playing with the drone while having the third battery ready when the second one runs out of energy, in the meantime, you can recharge the first battery while your kid is using the other two.

Therefore, your kid will be able to use the drone for as long as he wants or is allowed to.

Some parents are quite anxious letting their kids play alone outside and sometimes it is almost impossible to stay outside with your kid for as long as he wants to. Therefore, it may be a better option if you let him continue his flight session inside the house.

But, by doing this a lot of things may go wrong. He can bump the drone in different things, and this can cause some damages, as well he can hurt himself.

By choosing a smaller drone you not only avoid a lot of accidents but the experience playing with a drone inside will be also better as it may look like your kid will have more space where he can play.

Sometimes kids may become really impatient when learning new things and may tend to quit when the things are not turning the way they want to.

It is not unexpected for kids to break the drones while trying to do different acrobatics, trying to drive the drone in tight spots or wrongly appreciating the drone size while flying it near other objects.

Therefore, you may be required to buy more propellers as the propellers are the most common thing that breaks due to a collision. As well, in the worst-case scenario, you may even need to buy another drone.

Therefore, by choosing a budget-friendly drone you can save a good amount of money.

Can kids use drones and what is the minimum age required to use drones?

Yes, kids can use drones. However, the age recommended for using a drone is the age of 8, but this does not mean that kids under the age of 8 can not use drones as this is a decision that can be made solely by parents.

So, if you think that your kid is ready to use a drone, then he can use a drone regardless of its age as soon as you decide that he is able to use it.

Are drones safe for kids?

Yes, drones are safe for kids as the chance of a kid hurting himself while using a drone is quite low.

However, it does not mean that the kid can not hurt himself as he may be tempted to different tricks with the drone such as landing the drone on its head/hand or flying the drone between his legs and so on, or even not paying attention to the surroundings while following the drone.

Therefore, there is a small chance of getting hurt but this can be avoided if you teach your kid to use the drone in a proper manner.

Do kids have to use drones specially designed for kids?

No, kids can use any drone entrusted. However, it is recommended to let your kid play only with drones specially designed for kids.

No, sometimes flying a drone over a certain area can be illegal. Areas such as national parks, stadiums and raceways while hosting events and some facilities are zones that prohibit drones.

It is recommended to take a look at FAA (Federal Aviation Administration) Regulations and do a bit of research regarding prohibited areas before entrusting a drone to a kid.

What is the maximum altitude at which a kid can fly a drone?

However, most of the drones have built-in systems that won’t allow the user to fly it above 400 feet.

The best drones that you can get for kids are drones that can be used both inside and outside therefore, you need to focus on a smaller sized drone.

It is important for the drone to be able to interact with your kid ( for example being able to control the drone with voice or by hand gestures), as well features like built-in camera and flips commands can be a big plus as your kids will have more options while playing.

Also, it is recommended (but not necessarily) to focus on a drone that has multiple batteries as this can extend the flight time, however, if the charging time is not taking that much, a drone with a non-detachable battery can be a good option as long as the recharge time won’t take over 50 minutes – 1 hour.

The experience of playing with a drone can be way better if the drone has features that facilitate the flight. Features like headless mode, one key take-off and landing and altitude hold are features that have a great impact on your kid’s experience as he will be able to control the drone smoothly with a decreased chance of collisions and crashes.