Drones require a number of components to work properly and one such component is the drone controller.

This controller allows the drone pilot to communicate with the device.

Any information you feed into the transmitter is conveyed to the drone via the drone controller.

If you want the drone to go in a certain direction, simply move the sticks and the circuit board on the drone manipulates the motors of the device to do so.

The drone controller is equipped with many sensors that allow you to manage the unit during flight.

Stick around as we answer these questions and take a look at some FPV drone controllers on the market.

While some units can be flown without the controller, it is simply not as good as using a controller since the capabilities may not be the same.

Sometimes, it’s best to use your controller and the app provided by the manufacturer for best results.

Apps like DJI Fly App give you access to features and functions not possible with just a controller and likewise, without a controller, you won’t have a good flight with just the app.

There is also no one type suit all controller, you’ll have to find one that best matches your unit.

Most drones on the market come with a dedicated controller but in some cases, you’ll have to purchase your own controller.

Other times you’ll need to purchase a controller is if you build your own drone.

If you’re looking for your first radio and working on a tight budget, the iFlight iF8 is your best option.

This product is manufactured by RadioMaster which has a pretty good track record.

There are other cheaper controllers on the market but the quality just isn’t worth it.

The iFlight iF8 can bind to FrSky receivers running the ACCST and D8 protocols.

This makes it compatible with receivers like the FrSky, RXSR, iFlight iF8 receiver and many other bind-and-fly drones.

This quadcopter remote controller comes with a basic configuration and all the switches are pre-assigned to aux channels.

This means that you won’t have to plug it into a computer to set it up.

However, you can connect to your computer and practice flying using the flight simulator.

While it’s not the best controller out there, if you’re looking for a decent controller at a low price, then the iFlight IF8 is worth considering. 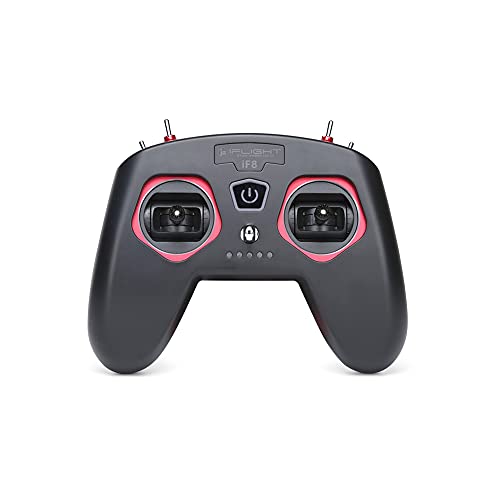 The RadioMaster TX16S is a great budget pick since it’s one of the best 4-in-1 multiprotocol modules on the market.

It can bind to most of the major receiving types including FrSky, FlySky and Specktrum.

This controller can also be used to control proprietary bind-and-fly aircraft.

For example, if you have a toy drone with a toy grade controller, you can probably use the TX16S to control it.

This is because the TX16S runs OpenTX which is a flexible operating system that allows you to do pretty much anything you want your controller to do.

However, beginners may find OpenTX a bit complicated to use in the beginning.

Another selling point of this unit is the huge screen that becomes touchscreen capable if you upgrade to OpenTX version 2.4.

The controller also comes with full-size Hall Effect gimbals and even works with the Crossfire micro module.

The Jumper T18 is similar to the RadioMaster TX16S so you may be wondering why you should choose the Jumper T18.

First off, the T18 comes with built-in support for 900MHz control which means it has the potential of giving you tens of kilometers of range.

So if you want a long-range controller, then this is going to give you enough range to meet your needs.

The T18 performs well when used with 900MHz receivers but can run into a bit of trouble with the 2.4GHz range.

The reason for this is because the manufacturers to make room for the external 900 MHz antenna equipped the unit with an internal 2.4 GHz antenna.

For more on antennas, read this drone antenna guide.

Unfortunately, there is no touchscreen capability with this controller as with the RadioMaster TX16S 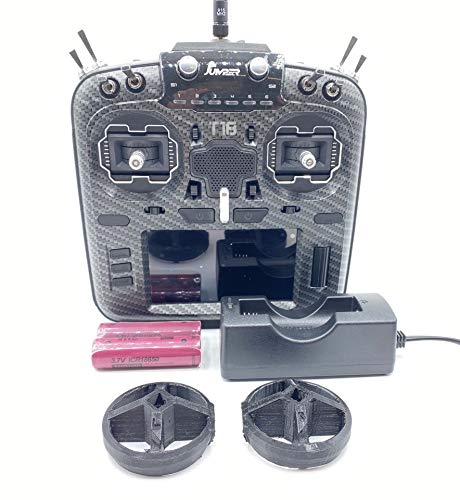 We have yet another RadioMaster flight controller on our list.

Most people complained about the TX16S ‘cheap plastic feel so the manufacturer decided to do something about that with this model.

You can get the Radiomaster TX16S max in various colors.

First, you have the carbon faceplate with Red CNC parts and black leather grips.

Moreover, this controller features a stiffer and heavier shell as well as metal buttons and rollers instead of plastic.

It also has a foldable metal carry handle and the leather grips are at the sides of the unit. 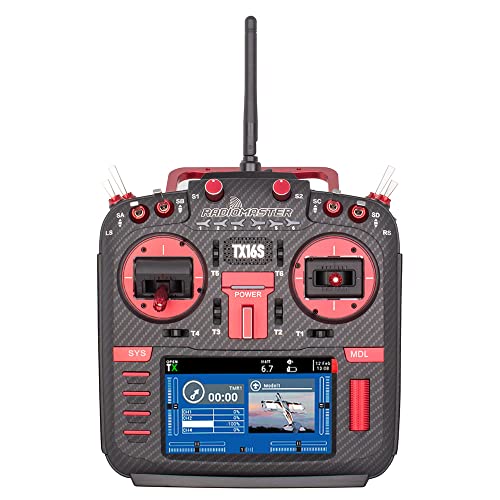 The Tango 2  comes with Crossfire built-in so that means no external module is needed.

Only purchase this unit if you only fly Crossfire although it does support 2.4GH receivers with an external module.

However, before you do that, it is better to go with a different controller.

The Tango 2  is well built and is of excellent quality when compared to others in its price range.

The gimbals are larger yet smoother than other gaming-controller-style drone controllers.

This unit runs open TX which means that it can be programmed to do almost anything you want your controller to do.

It comes with full-size Hall sensor gimbals and is small enough to fit into your backpack for when you’re on the go.

You’ll get a range out to 30km, thanks to the use of CRSFShot that has the lowest latency and direct response of any controller available. 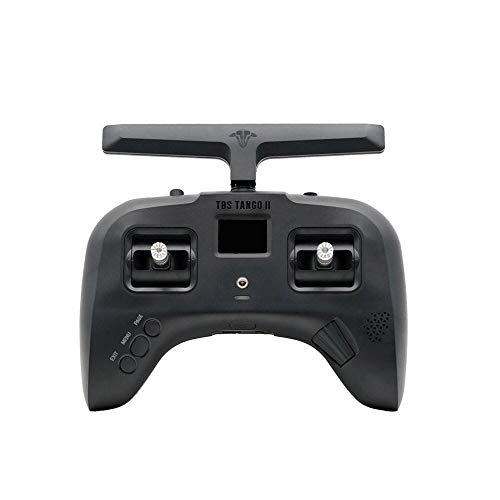 How are drones controlled?

Drones are controlled by remote ground control systems which are also referred to as a ground cockpit.

An unmanned aerial vehicle has two parts; the drone itself and the control system.

Typically, the nose of the drone is where all the sensors are located while the rest of the body is full of other drone technology systems.

How do drone controllers work?

Drone controllers send radio signals from the remote controller to the drone which tells it what to do.

The signals are sent from the radio transmitter in the drone remote control unit and are received by the drone’s receiver onboard the drone.

This is why you will find that some may refer to the drone controller as the drone transmitter or radio controller.

Quite a lot has to happen for a drone controller to be able to tell a drone what to do.

Remote control for drones is difficult to understand without getting into the specific components of a drone.

Here’s a short breakdown of how everything works.

To simply turn your drone to the right requires the radio signal to be sent from the drone controller.

The signal is then received by the receiver onboard the drone and turned into action by the quadcopter flight controller.

It is then sent through the ESCs to the drone’s motors, where the turn is then executed.

To get a bit more familiar with your drone controller, you need to know some of the controller’s terminology.

There are four ways to move a drone using a controller.

This movement allows your drone to go left or right during flight.

This movement rotates your drone clockwise or counterclockwise thereby enabling you to make circles or create patterns in the air.

The throttle controls the amount of power sent to the drone. It is what makes the drone go faster or slower.

The harder you push the stick in a certain direction, the more power is transmitted to the drone in that direction during its flight.

If you are a new drone pilot then you should go light on the sticks and push gently until you get a hang of things.

Each controller is different and even if you have some experience piloting a drone, you should get a feel of the new drone controller before going full throttle.

To understand a drone controller, here are some of the basic features you can find:

The right stick on the controller gives you the ability to control the roll and pitch of the drone.

It allows you to move the drone either left or right as well as forward and backward.

The left stick on the controller lets you control the Yaw and throttle of your drone.

It allows you to control the height at which you fly and lets you rotate the drone clockwise or counterclockwise during flight.

Each drone controller will have its own Trim button.

The purpose of the trim button is to correct the balance of the drone.

Let’s say you notice your drone is tilting toward one direction just after takeoff then it needs to be trimmed.

You’ll find that many controllers on the market do not have screens attached to the controller while some do.

If there is no screen then you may be able to use your smartphone or tablet screen for FPV flights.

If this happens, do these:

If neither of these methods helps then you can try posting the issue in a drone-focused community forum.

You can also try other places that deal with drones and drone-related topics online to see if someone else had the same experience and probably has a solution.

Remember to be as specific as possible when posting and list the model of your drone as well as the steps you’ve already taken to fix the issue.

What makes drone controllers unique in the RC aircraft world?

An RC aircraft is any small flying machine that can be controlled remotely.

RC aircraft have been around for a long time, way before drones.

While RC traditionally refers to radio control, it is often used to mean remote controlled as well.

Whether you refer to RC as radio control or remote control, you are referring to any aircraft that can be controlled by a pilot on the ground using a controller or a radio transmitter.

The controller or transmitter connects and communicates with the unit using radio signals.

One of the biggest differences between drones and other RC aircraft is how they’re powered.

All drones today are multi-rotor aircraft.

This means that they have multiple rotors with the minimum usually at four.

Other units may have as much as eight or even twelve.

Depending on the number of rotors a drone has, you may hear some drones being referred to as quadcopters(4 rotors) or hexacopters(6 rotors), and so on.

On the other hand, you will find that all other remote-controlled aircraft are controlled with a single motor.

The difference between multi-rotor and single motor directly impacts the way drone controllers connect with the aircraft they control.

There is also a difference in the type of control you’d have over his or her aircraft.

You can use the throttle on the controller to add or reduce the power just a tiny bit.

These changes in power will directly translate to the power output and the resulting speed of the aircraft.

It would be impossible to compare the throttle on a single motor aircraft to the one on a drone control.

This is because you simply cannot control multiple rotors after the same time.

What this means is that you cannot have a throttle for each motor that the pilot will need to constantly balance with the others.

Flight controllers on the drone allow the drone to stay balanced in the air and determine which rotors get power.

It sends power to different rotors at different times to maintain a steady flight.